Self-Discovery as the Essential Focus of a Yoga Practice

An approach to the practice of yoga that uses self-discovery as its essential focus.

The practice of I AM Yoga is shifting from your head to your heart, from your mind to prana, from thinking to feeling, from doing to being, from outer to inner, from forcing to flowing, from making it happen to letting it happen.

Witnessing presence is its primary tool for the practice of yoga postures.  This inner dimension of yoga I call meditation in motion.  Patanjali says yoga means witnessing the modifications of mind. What he is saying is that the practice of Ashtanga yoga must be accompanied by meditative awareness to reconnect with the formless being that I AM.  Yoga practiced with meditative awareness is radically different than what has become popular.

Ordinarily, the ego-mind manages the movement of the body and in doing so, it constantly judges and evaluates through its self-image and self-concepts.

As you are perform physical postures externally, internally a dialogue is being conducted by the self-image and self-concepts that you are not.  The ego-mind reinforces your preprogrammed, conditioned, self-concepts.  While you are engaged in the practice, your thoughts, feelings and emotions are in a perpetual mental dialogue.  You may feel frustrated because you cannot perform the posture as well as you expected.  Your self-concept says, you’re not good enough, look how well others are practicing, or you may get irritated because someone else is performing better than you, or you may say, look at me, I can do better than anybody else.  People may be performing postures like the pictures in the yoga book, but internally they are using the yoga practice to create mental and emotional conflicts within.

The practice of I AM Yoga is to change the ego-posture into a yoga posture.

It uses very powerful tools, techniques and principles to help you to continually disengage from the reactive perceiver, the ego-mind that automatically acts with fight or flight reaction whenever it faces an edge in the practice of asanas.

The practice of I AM Yoga begins with what we want in the end.

The meaning of the word yoga is union of the individual Soul or Atman that I AM with the cosmic Soul, Paramatman.  According to Patanjali, the only obstacle that exists is the ego-mind.  It prevents us from seeing who we really are or what really is present. What allows us to disengage from the ego-mind that we are not is witnessing, choiceless presence that I AM.

In the practice of Patanjali’s eight-limbed Ashtanga yoga, the main focus is witnessing mental modifications of the mind.

Amrit Yoga uses meditative witness along with the practice of asanas and pranayams.  This is it is called meditation in motion. Amrit Yoga uses witness to disengage from the reactive perceiver, the ego-mind.  This allows you to descend from ego-mind as a performer, doer and achiever of the postures to the impersonal, cosmic intelligence of prana that animates your body and is the link to the formless power of presence that I AM.

Choiceless awareness allows you to disengage and disconnect from the compulsive, reactive choices that arise from ego-mind.  Amrit Yoga represents the radical approach to what is missing in the popular practice of Hatha Yoga.  Ordinarily, when you practice asanas and you come to an edge, the reactive perceiver, reacts with fight or flight reaction.  Meditation based practice allows you to replace the reactive ego-mind as a doer and achiever, with a responsive interaction for integration on the edge.

The practice is focused not on eliminating the edge, but the edgy ego-mind.

When the ego-mind faces the edge, it does not recognize that the edge is its own creation through the past.  The edgy, reactive ego-mind can remove the edge with struggle and force, but cannot remove itself.  Many popular yoga practices remove the edge rather than removing the ego-mind that remains the cause hidden in the unconscious karma body of self-image.  The ego-mind is the only cause that creates multitudes of effects that appear in the form of physical inhibitions, mental and emotional irritations, fears, frustrations, etc.

The inner dimension of I AM Yoga focuses on withdrawing from the cause, the ego-mind rather than focusing on eliminating the symptoms.

If you eliminate one symptom, all other 99 will survive, but when you eliminate the cause you begin to erode all the symptoms.  Amrit Yoga focuses on a one step solution that cannot be solved by ten-thousand steps.  This is why every step of the way, in the practice of asanas, you learn to replace the domination of ego-mind over prana with witnessing presence. This is why we call it meditation in motion or the posture of consciousness. The entire practice cultivates your ability to see the truth from untruth, reality from unreality from time-bound ego-mind to the timeless power of presence.

You learn to move from the Manomaya kosha, the mental body, to the subtler and more evolved consciousness, which yogis call vignanamaya kosha or the buddhi, where you progressively develop the ability to see what is real from unreal.  Your mind that was a powerful tool of ego-mind now moves closer to the bliss body or Anandamaya kosha.

Every step of the way, you are moving closer to the integrative consciousness of the bliss body.  The more you step out of the ego-mind, the more you respond to the promptings of prana, the pranic intelligence of the primal intelligence that unlocks the vast, creative, intuitive potentials that floods your consciousness and flows unimpeded by the ego-mind. As you let go of your learned ways of overcoming your obstacles, inhibitions, weaknesses that appear in your body, the creative genius of your prana body invents the new ways and new options to solve the problems from the core.

In the practice of I AM Yoga, you progressively learn how to withdraw from ego-mind dominating the primal, instinctive wisdom of your energy body and replace it with witnessing presence.

When you combine the witnessing presence with what is present in the form of the edge, you do not fight on the edge.  Instead, the light of consciousness dissolves the darkness.  The energy that was trapped in the unconscious, karmic body gets released and begins to flow into harmonious co-creation with consciousness.  The self-healing, self-balancing, homeostatic functions of the prana body takes a leap into the evolutionary activity of prana that creates its own positions, pranayams, mudras to eliminate the inhibitions, limitations and blockages that are built into the biology and psychology of the practitioner.

I AM Yoga is making a paradigm shift from the rational, logical, left-brain that dominates the sympathetic nervous system to the non-reactive, witnessing presence.

As the mental and emotional agitations, conflicts and modifications are reduced, your self-balancing, self-healing, restorative, regenerative functions of prana become accelerated.  When you combine the practice of meditation with the postures, you take the therapeutic impact of physical postures into a whole new dimension.  It is the direct experience of unfolding the dormant, divine powers of the presence within.

The ego-mind operates out of the unconscious, unresolved impressions built into the karmic memory body.  As a result, the ego-mind takes the energy from the homeostatic, self-balancing, self-healing wisdom of the body and uses it to enter into fight or flight reaction to the symptoms that appear on the surface of the body.  Such reactive actions that arise from ego-mind, feeds itself with reactively charged energy for its sustenance and survival.

The witness that acts from beyond the ego-mind is neither for nor against the edge.

When engaged in ego-postures, your reactive mind engages all your attention into your unresolved, karmic impressions of the past. It can only deal with the way you have processed your experiences of your attractions and repulsions, addictions and fears as you have from the past.

Your mind that lives in the karmic memory body of time, lives its unresolved impressions of addictions and fears that manifest through your body that lives in time. The mind that lives in the dimension of time with its emotionally charged addictions to pleasure and fear of pain, leaves its conflict-creating, stress-producing impressions in the body as blockages.  Your body is the visible blueprint of the invisible architect called the mind.  The way you live your life on a mental or emotional level materializes through your body. It gets built in your body as energetic blocks.  These energetic blocks are symptomatic through your muscles, nerves, glands, and bones.  When you practice Yoga asanas, what appears in the form of an edge to the edgy ego-mind, is its own creation.

When these energetic blocks created by ego-mind appear in the form of the edge you face in your yoga posture, the edge is not separating you from the Source of Oneness.

The ego is.  It is the ego that separates you from the Source of Oneness that yoga is.  Every time you convert your reactive perception to non-reactive perceiver, the knowledge of truth frees you from the self-concepts and opinions you have of yourself or of others.  There is nothing or no one for you or against you as it appears to be. You are instantly freed from all that has happened in the form of addictions and fears that are the cause of all human suffering.

Every time you replace the reactive perceiver with witnessing presence, you are withdrawing from feeding your ego-mind and self-image and progressively, who you are not dies of starvation.

You cannot fight with who you are not because it lives as memories and if you fight it with your mind, you feed it.  In the practice of Amrit Yoga, you withdraw from the reactive perceiver, the ego-mind that engages in fight or flight reaction for its own survival. 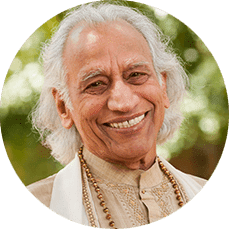 Founder of Kripalu Yoga & I AM Yoga, the Integrative Amrit Method
www.amritji.org

Join our mailing list to receive the latest updates on upcoming programs & events. New subscribers will be sent a discount code good for 5% off any program!

Thanks for subscribing! Use this code during online registration checkout: AMRIT5OFF